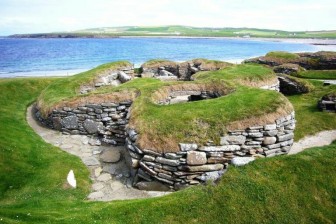 Off the Northern tip of Scotland, where the Atlantic Ocean meets the North Sea, lies a group of 70 or so islands called the Orkneys. These largely treeless isles are frequently battered by Atlantic storms, gales and rain. It was during one such storm in the winter of 1850, when the combination of wind and high tides stripped away the grass from the top of a small hill called Skerrabra on the west side of the largest island known simply as ‘The Mainland’. This revealed a number of stone dwellings.

The local landowner started excavations on the site, and within twenty years the remains of four ancient houses were unearthed. However, work was later abandoned until 1925 when another storm damaged some of the excavated buildings. A sea wall was proposed to protect the site, and, during construction, yet more buildings were discovered.

It was first believed that the village was an Iron Age settlement, dating from around 1500 years ago. However, radiocarbon dating proved that it was in fact much older. It was a Neolithic village and dated back to 3000 B.C. The village had been inhabited for a period of about 600 years. The Neolithic village of Skara Brae now consists of eight dwellings, connected by low, covered passages. The stone buildings are extremely well-preserved, thanks to the layer of sand that protected the settlement. The interior fittings, furniture and household objects also survive to this day.

The houses were partly built into a mound of waste material known as ‘midden’, which would have provided both stability and a thick layer of thick insulation against the harsh climate. From the outside, the village would have looked like a low, round mound, from which the rooves emerge. Nothing remains of these, so it is assumed that driftwood or whalebone beams supported a roof made of turf, skins, seaweed or straw. The dwellings were all connected by a series of passageways covered by stone slabs. This allowed the villagers to travel from one house to another without stepping outside – not a bad idea, considering the harsh climate. There was only one main passageway leading outside the village, which could be sealed from the inside.

Evidence suggests that there were never more than eight dwellings, suggesting a total population of no more than 100 people. The houses are all very similar in design, consisting of a large square room with a central fireplace. The furnishings were all made of stone, given the shortage of wood on the islands. Two stone-edged compartments on either side of the fireplace appear to be beds. Every house also had a distinctive shelved, stone dresser. Its position, opposite the doorway and illuminated by the fire, indicating that this piece of furniture was not just a useful storage space, but had special significance. There was a sunken floor tank in each dwelling, possibly to supply shell fish. The village also had a remarkably sophisticated drainage system.

One of the buildings, now known as ‘house seven’, is intriguingly different from the others. This building is detached from the others, and has a door which door could only be secured from the outside, suggesting that the house may have served as a type of jail – an unusual necessity in a village of less than a hundred people. ‘House eight’ is also unique, having none of the furnishings of the other houses. Excavators have found that the floor of the building is littered with fragments from the manufacture of tools, suggesting that the room was a workshop.

The standardised house design has led some to believe that there was no hierarchy of rank within the settlement at Skara Brae, and that all villagers were equal. Whether or not this is true is debatable. However, it is likely that life here was probably quite comfortable for the Neolithic people. The villagers kept sheep and cattle, and grew wheat and barley. They probably traded these commodities for pottery. They would have hunted red deer and boar for their meat and skins. They would also have consumed fish, seal and whale meat, and the eggs of sea birds. The skin and bones of these animals would have provided tools such as needles and knives. Flint for cutting tools would have been traded or gathered from the shore.  Fuel probably came from seaweed, making the inside of the dwellings smoky and probably smelly. Driftwood was probably too valuable to burn.

Why Skara Brae was deserted is still unknown. For some time it was thought that the people met with disaster. This theory came about when beads from a necklace were found abandoned on the floor.  It was thought that the woman who dropped them was in too much of a panic to pick them up. However, it is more likely that environmental and social factors forced people to leave. Firstly, the encroachment of sand and salt water would have made farming increasingly difficult. Second, there may have been changes in Neolithic society. Construction of large henge monuments in other parts of the island suggests that an elite ruling body, with the power to control other people, was emerging. Tight-knit communities like the one at Skara Brae were being replaced by larger, organised civilizations.